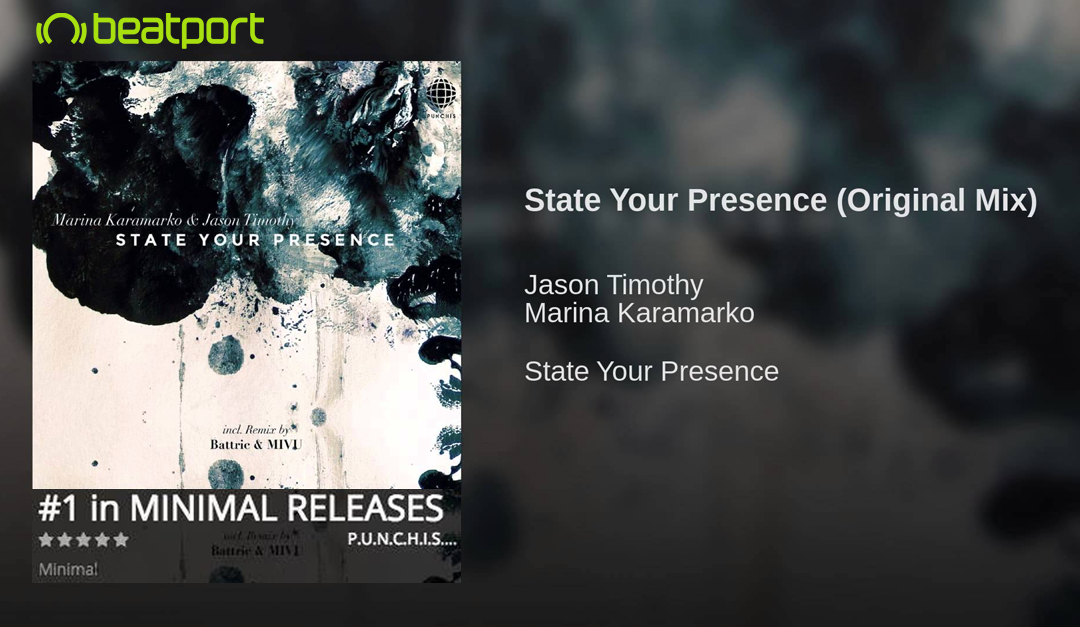 Today, I find myself with my 1st #1 release on Beatport. As I write this, it’s been #1 in Minimal releases for 4 straight days. Something completely unexpected.

I’ve hit the top 5 a couple of times for a day or 2, but never topped the spot until now.

How did it happen? I really don’t know. We as artists don’t have the luxury of dictating what is good and what isn’t. We create the songs and then let the public decide. Sometimes you get to celebrate a win & other times you are disappointed. It’s all part of the game.

This particular EP, interestingly enough, started with me asking my students for their unfinished 8 bar loops. The now Label owner (ThanQ), Producer & well-established DJ, Marina Karamarko answered that call. In the weeks that followed, I put together a series of video tutorials showing how I would approach finishing that tune. The goal at the time wasn’t even to release the track, but upon listening back, I got back in touch with Marina & suggested we both tighten it up for a proper release.  This song became Dysmorph.

Marina had another idea bouncing around and we decided we should try to collaborate on a 2nd song. At some point during the process, I have taken the idea in 1 direction, and she had gone in another. Since we couldn’t decide which to use (because we liked both results), we decided we would release both as separate songs. Now we had 3 songs, instead of 2.

There we had it, from 8 bar loop to a completed EP. Sometimes, that is how things come about. They start as an experiment & then evolve. The first song went through several changes, returning to it month after month. It wasn’t a song that just came together over 3-5 days. This EP was on and off the backburner between projects for over a year. My work ethic doesn’t allow me to throw away songs anymore. If something isn’t working, I don’t ditch the song. Instead, I break it down and figure out what about it doesn’t work & build it back up.

You can learn SO much more as a music producer if you push yourself to solve problems in songs you would normally trash. This is one of the many things I teach in my “Create an EP in 30 Days” Master Course.

So now we had 3 songs and needed to shop for a label. Yes, it eventually signed to my label  Punchis Records, but I am just 1 of the founders. My partner Sergei is the quality control guy & he has turned down a # of my tracks (and rightfully so). I like that quality control, as it makes me a better producer, even if we disagree at times. Sergei made a few suggestions on a couple of the songs which we agreed would improve the songs a bit, but ultimately he was really happy with the release & then got a remixer involved. Battric & MIVU took the job and made an excellent take on one of the original tunes.

So that was it, now we had to get the cover art done & schedule it for release.

Although we were pretty proud of this EP, like any release, we really had no idea ho well it would do. For example, when I released my 16 song album Deconstruction Time, I was hoping to see it skyrocket to the top, but it ended up with only marginal success, even though it stayed in the charts longer than an average EP. The point is, you just never know & you can’t force it.

So when it finally got released, as usual, the 1st day nothing happens, you are just in anticipation. The charts are a daily reflection of the sales from the day before.

So the next day it hit #31 on the Minimal Chart Releases. Surprising, because usually you don’t see results for a couple of days. The next day it stuck around that area or might have dropped a bit. A bit of a letdown, but we still had hope it might reach the top 10.

The next day it did just that, hitting #7, then #2! At this point, our label had reached #2 once before & I have personally reached #3, so this was already worth celebrating. We had high hopes for #1 the following dayf, but certainly didn’t expect it. When it happened, we were all really excited, as this was a first for everyone involved. (Beatport categorizes by genre, both their Top 100 releases & Top 100 Songs. Then they have their top songs & releases over all genres. Good luck on hitting that one).

Now normally, when you hit a peak like this, you fall pretty fast the next day. This is what I’ve always experienced. And within a few days, you are off the charts completely in many cases. So the fact that I sit here today, the 4th day still at #1, I am shocked and humbled. Since I haven’t experienced this before, I have no idea what this means in terms of my career. Digital labels don’t really make much money, truth be told, so I know financially my life won’t change through digital music sales. Will I start being offered more gigs nationally and abroad? This remains to be seen.

My guess is, probably not, unless I make a big push from my end to capitalize on this current hit EP. That is really the truth of the matter. No matter the circumstances, unless you are charting big in the most commercial styles of music, you still have to create your own luck. If by some stroke of luck, my inbox starts to fill with offers, I will update this post, but I predict life will stay pretty much the same, except a few nods from my friends.

This is why it is SO important to not get hung up in self-congratulations & get back to making music. Maybe the next one is another hit or maybe it’s a flop. At the end of the day, consistency will get you much further than having 1 song that rises to the top & then falls back down.

Although I hope all of you reading this get the exhilaration someday of having a # 1 in your style of music, my greater hope is that you never stop making & finishing music. Your best work usually isn’t the most popular anyway. Enjoy the popularity contest for what it is, but don’t ever get stuck there.